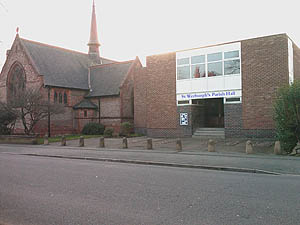 The Chorlton Players are a non-profit-making amateur theatre group based in Chorlton-cum-Hardy, Manchester, in the UK.

Established in 1963, and formerly known as the St Werburghs Amateur Dramatic Society (SWADS), our performance base is at the Parish Hall, St Werburgh’s Church, St Werburgh’s Road, although due to the current popularity of the hall, we rehearse elsewhere leading up to the actual stage rehearsals on the week before the play. The society has been running for over fifty years now, and we often undertake some more diverse productions than the expected ‘amdram’ fare. High standards, in acting, and technically, are always paramount. For example, a few of our members sometimes make some short films starring members of the society. These can be found on our YouTube channel

We normally meet every Monday and Wednesday in the downstairs function room of the SPREAD EAGLE, Wilbraham Road, Chorlton between 8pm and 11pm.

We have a £30 annual membership fee to cover hall and costume hire etc, although it is half price for unwaged people.

We need dedicated backstage crew, and front-of-house volunteers, as well as budding actors, so if you have an interest in any part of the process of putting on the show, get in touch… it’s not all about acting, it’s about making friends and having a laugh!

Our current membership stands at about 40-50 members of both sexes ranging from our youngest at 18 years to our oldest who are retired, though our average age is in the 30’s, so we are quite a young, and often somewhat irreverent, group.

Unlike many groups, we do not hold auditions for membership, just the shows themselves, and we cast each show entirely on merit.. ie. how well you read for a part at the time. Being in the society for five years is NOT a pre-requisite to landing a lead role! It’s the best people for the job at the time. It is worth pointing out, however, that our number has grown considerably over the past few years, and as such, competition can be quite stiff! This applies to technical roles too. If you have any sound, lighting or stage management experience, jump onboard.

What Do We Do?

We currently stage five productions each year. Plays ranging from classics to comedies to the more unusual, and an annual Panto and a Hot Pot (a songs and sketches show with a theme).

Our season starts at the beginning of the year with our annual pantomime in January. A few of our pantos have been written by members of the society, and all the stops get pulled for this one. A cast of thousands, smoke, light effects, pyrotechnics, and any technical wizardry the back stage crew can muster. Songs, dance, men dressed as women, women dressed as men. Good clean honest fun.

After that, we stage a play at the end of March, followed by our “Hotpot” show at the beginning of June. (Hotpot shows are a collection of sketches, songs and variety, all tied together with a theme…)

Our summer play then takes place in late August, followed by another play in late October.

All Work and No Play Then?

Not in the least. We are socially active group, who enjoy the hospitality of Chorlton’s restaurants and pubs frequently. Add to that karaoke nights, fundraisers, an annual Christmas party, bowling nights, theatre visits, Halloween; any excuse for a few drinks and a laugh really. The social side plays a big part.

If you are interested, click HERE and drop us a message, or just turn up at one of our rehearsals, and introduce yourself… we don’t bite!

For directions to our rehearsal and performance venues, click here.